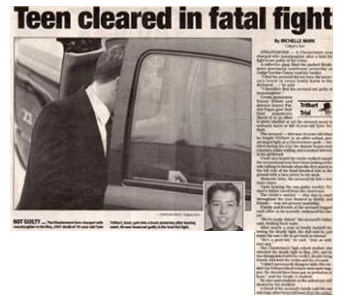 STRATHMORE – A Chestermere teen charged with manslaughter after a fatal fist fight is not guilty of the crime.

“I find the accused did not have the necessary intent to cause bodily harm to the deceased…,” he said.

“I therefore find the accused not guilty of manslaughter.”

Crown prosecutor Danny Elliott and defence lawyer Patrick Fagan gave their final arguments March 22 in an effort to prove whether or not the accused meant to seriously harm or kill the 16-year-old victim.

The accused – who was 16 years old when he fought the victim in an after-school, prearranged fight at a Chestermere park – testified during his trial the dispute began over rumours, name-calling, and a mutual interest in his girlfriend.

Court also heard the victim walked toward the accused and may have been looking to the side talking to friends when the first punch to the left side of his head knocked him to the ground with a torn artery to his neck.

Moments later, the accused hit him a few more times.

Upon hearing the non-guilty verdict. The victims father raced from the courtroom. The victim’s mother – who was in court throughout the trial flanked by family and friends – was not present yesterday. Family and friends of the accused hugged each other as he tearfully embraced his lawyer.

After nearly a year of family turmoil following the deadly fight, the dad said he just wants his son’s life to get back to normal.

One Chestermere high school student who attended the deadly fight in May, 2001 said he was disappointed with the verdict, despite being friends with both the victim and the accused.

“I didn’t necessarily disagree with (the verdict) but I’d have liked to have seen more happen. He should have been put on probation at least,” said the Grade 11 student.
He also said students at the school are still shaken by the incident.

A friend of the accused’s family said she can only hope other teens will learn from the ordeal.

“This is an absolute tragedy for everyone involved and I hope that everybody – all the kids – take heart in this and that there really is and end to the violence in the schools,” said judy Nyberg. “There is something to be learned here.”