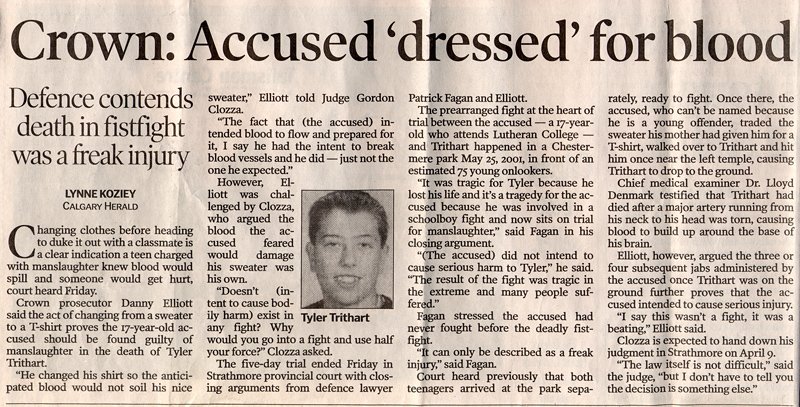 Changing clothes before heading to duke it out with a classmate is a clear indication a teen charged with manslaughter knew blood would spill and someone would get hurt, court heard Friday.

Crown prosecutor Danny Elliott said the act of changing from a sweater to a T-shirt proves the 17-year-old accused should be found guilty of manslaughter in the death of Tyler Trithart.

“He changed his shirt so the anticipated blood would not soil his nice sweater,” Elliott told Judge Gordon Clozza.

“The fact that (the accused) intended blood to flow and prepared for it, I say he had the intent to break blood vessels and he did — just not the one he expected.”

However, Elliott was challenged by Clozza, who argued the blood the accused feared would damage his sweater was his own.

“Doesn’t (intent to cause bodily harm) exist in any fight? Why would you go into a fight and use half your force?” Clozza asked.

The prearranged fight at the heart of trial between the accused — a 17-year-old who attends Lutheran College — and Trithart happened in a Chestermere park May 25, 2001, in front of an estimated 75 young onlookers.

“It was tragic for Tyler because he lost his life and it’s a tragedy for the accused because he was involved in a schoolboy fight and now sits on trial for manslaughter,” said Fagan in his closing argument.

“(The accused) did not intend to cause serious harm to Tyler,” he said. “The result of the fight was tragic in the extreme and many people suffered.”

Fagan stressed the accused had never fought before the deadly fistfight. “It can only be described as a freak injury,” said Fagan.

Court heard previously that both teenagers arrived at the park separately, ready to fight. Once there, the accused, who can’t be named because he is a young offender, traded the sweater his mother had given him for a T-shirt, walked over to Trithart and hit him once near the left temple, causing Trithart to drop to the ground.

Chief medical examiner Dr. Lloyd Denmark testified that Trithart had died after a major artery running from his neck to his head was torn, causing blood to build up around the base of his brain.

Elliott, however, argued the three or four subsequent jabs administered by the accused once Trithart was on the ground further proves that the accused intended to cause serious injury.

“I say this wasn’t a fight, it was a beating,” Elliott said.

Clozza is expected to hand down his judgment in Strathmore on April 9.

“The law itself is not difficult,” said the judge, “but I don’t have to tell you the decision is something else.”